Rising in the Philippines’ most prestigious financial and commercial district is a name synonymous with unparalleled service, quality and real estate. Trump Tower at Century City – the country’s most amenitized residential high-rise and Manila’s definitive landmark.

Live in the address that celebrates your stature. Trump Tower at Century City

Trump Tower at Century City’s concept of the ‘peeled’ façade is articulated with internal balconies. The top and bottom corners peel away which accentuates the dynamic form of the tower. Its curtain wall facade maximizes spectacular panoramic views of the city. The facade’s function is environmentally responsive where light shelves and shading systems are designed to react to the building’s orientation in relation to sun’s path.

At Trump Tower at Century City, units are carefully designed to adhere to the Trump brand’s superior design and development standards. 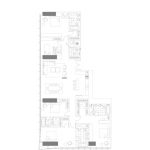